Hi I am Eric Olson. This is my site which I am using for presonal use. I have about 80 songs which you can listen to. They range from techno to classical.

As for a bio well I guess I can give a little one.

In the time I have lived here I have grown accustom to playing music and writing music. I also spend a lot of time playing games. I play the piano and attempted guitar for a while. I think is has been about 10 years I have played piano but I taught myself so I still kind of suck.

As for music I started writing about 8 years ago. I first used cakewalk to write music but I grew weary of the midi sounds. I switched to Fruity Loops and Rebirth later on. I now spend most of my time using Fruity Loops which is where most of the songs were written.

I enjoy techno, classical and rock the most so that is what most of my songs sound like. I will one day learn to sing and will add words to some songs. Well other then music I do watch a little TV and play video games.

I like to watch a few shows like Doctor Who, Stargate, One Tree Hill, Smallville, Everwood, The OC and Battlestar Galactica. As for games I play only one game anymore and well I probably spend way to much time on it. (World of Warcraft) I play on the Natherzim server with a horde character. He is a Tauren Warrior level 56 at the moment. His name is Runningwild.

I need to find a job but after a while of searching I have had no luck and well you get a little discouraged after so long. I have had a few jobs before. My first job was working for Petsmart stocking cans making 6.75 an hour. Second job was at Logistic Management Services Inc. making 9 an hour. Third job was at Big Lots which was probably my worse job because of the manager.

He was the laziest manager I have ever seen. I mean even the customers complained about him to me. Anyways that was a bad experience but I made 7.50 an hour there. Which I quit that job when I found another one working for Victor Newman & Company. That was a pretty good job, just not enough exercising in it. I was doing taxes and book keeping for the most part.

I mean it was fine but that job was a little on the boring side. Who wants to look at numbers all day? The owners were great though so made it nice. From there I went and babysat for my sister in Kansas City for one tax season to help them out. That was probably the best 3 months of my life.

After that I went and worked for Acme Heating & Cooling. Well that wasnt a bad job and the people were nice. I would have stayed there but one day I was pulling a furnace out of a basement and I must have pulled something cause I couldnt lift a thing after. I didnt know it at the time but I missed 4 days because of it and they fired me. Which I dont blame them because I would do the same thing.

Now I am a bum again waiting for the next job. I was looking into schooling but I dont want to go for something I wont like. Although someone showed me something last night which looked like a good thing to do. A audio engineer. I will be looking into trying to do that now. While I look for work.

I would like to get a job in the music business. I mean I think I have some talent and would enjoy doing it. It has taken me this long to even figure out what I want to do in life. I guess better late then never.

Well back to the good years! While I was in Kansas City I was forced into overcoming shyness for one thing. Let me tell you that is a horrible thing to have. I made more friends in them three months then the rest of my life. I will one day find a way to move out there again and live.

Now for another part of my life which is religion! (and I know what your thinking oh another one of those people! lol well maybe) I have been going to church well since I was born but dont be fooled. I didnt believe anything when I was younger and didnt care about church.

I think until recently I have really started to truly believe God really does exist. I mean how could he not. Anyways we start by going to World Wide Church of God which is a Sabbath keeping church. (which means we go on Saturday)

Well anyways the guy who started that organization died and another guy took over who never even really believed what the original guy taught. Well from there he started changing everything and so people that were in it started to leave. Which when that happened another guy formed Global Church of God which well that is where we started to go to once we reallized what was happening.

Well from that one guy got a little power hungry and it started all over again. So the guy who started this group started another church called Living Church of God which is the current group I am attending.

Ok so anyways I have searched hard to try and understand everything. Which is not fun I will tell you. My mind feels like it is going to break down sometimes. Who knows what to think anymore cause I sure dont. I mean I just think whatever the bible says is right. So I try to do what it say and yet I find myself not doing it.

How do you live with yourself when you cant do the stuff you believe? I mean is it going to happen no matter what? I mean even Paul says he does stuff he wills not to do. That is crazy cause it is putting me on the brink of insanity. Well not really but it feels like it sometimes.

Ok I am getting weird now so I better stop for now. I think I will maybe finish this later.

My own thoughts to remind myself to change.

Rise to the Top

My thoughts about war.

Some questions and thoughts I had. 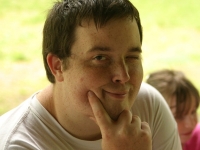 Me at a picnic.